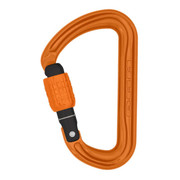 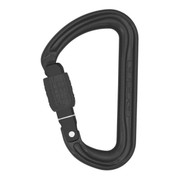 The DMM Shadow Screwgate strikes an ideal balance between low weight and useability. Weighing just 50 grams thanks to I-Beam construction, you can carry several Shadows before the weight starts to tell. Despite its low weight, the Shadow is big enough to use in winter with gloves on. A locking carabiner for all situations.

Offset D carabiner for optimal loading and ergonomics
D-Shaped carabiners encourage loading in their strongest orientation by forcing loads toward the carabiner spine. An Offset D refines this basic design by extending the top bar, increasing internal volume. This improves handling and compatibility with thick ropes and slings.

Keylock nose eliminates snagging
This carabiner's nose slots into a groove in the gate, allowing it to achieve full strength without a gate notch. This creates a clean internal profile that won't catch on gear, bolts or slings, giving easier clipping and removal from systems.

I-Beam construction for optimum strength to weight ratio
I-Beam construction techniques allow carabiners to be lighter without compromising strength. This is achieved through hot forging, a process which allows metal to be made into complex shapes that improve functionality.