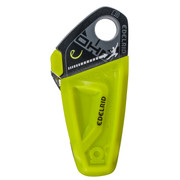 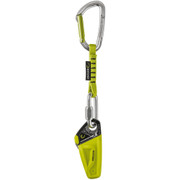 Added safety when there is a large weight difference between climbers

The OHM from Edelrid is an assisted-braking resistor to increase rope friction when there is a large weight difference between the belayer and lead climber. In the event of a fall, the OHM increases the amount of rope friction so that the lighter belayer can hold a heavier climber without difficulty. (The OHM attaches to the first bolt on a lead climb and is not a hand-held belay device.)

Balancing the weight difference between belayer and climber
The EDELRID OHM is an innovative solution for the problems experienced by climbing partners with a significant difference in weight. The OHM is an assisted-braking resistor that you install at the first bolt in the safety chain. In the event of a fall, the OHM increases rope friction so that a lighter belayer can hold a heavier partner without being suddenly pulled off the ground and thrown against the wall. The OHM still enables smooth paying out and taking in rope when climbing and belaying and has no negative effect on handling. The OHM was developed for use at both climbing walls and outdoor sport climbing venues.

The problem: climbing partners with a significant difference in weight
The solution: the OHM - assisted-braking resistance to increase rope friction
-- The development of the OHM was supported by the Institute of Mechanical Handling and Logistics at the University of Stuttgart. The device does not stop the rope abruptly; instead it progressively brakes the speed it runs through, so that the belayer can still dynamically arrest the fall. The OHM increases the amount of friction in the safety chain independent of the belay device used.
-- The OHM is designed not to affect rope handling when belaying a lead climber. It neither increases rope drag for the lead climber, nor has a negative affect when paying out rope. The device's assisted braking mechanism is only activated in the event of a fall.
-- The OHM benefits both climber and belayer: the belayer won't be pulled against the wall in an uncontrolled manner. The climber can climb right to their limits, without having to worry that their belayer might not be able to hold them should they fall and with no fear of a hard landing.
-- The German and Swiss Alpine Clubs recommend that a climber should not weigh more than 1.33 times their belayer. In the event of a big fall, in particular in the gym, such large differences in weight require extreme care and attention on the part of the belayer.
-- Including the OHM into the safety chain increases this factor significantly. With this device, it is now possible for climbers in the lower weight ranges to belay a lead climber who is up to 100% heavier than the belayer. The OHM is suitable for ropes with a diameter between 8.9 and 11 mm and is particularly beneficial for belayers with a body weighing upwards of 40 kg.